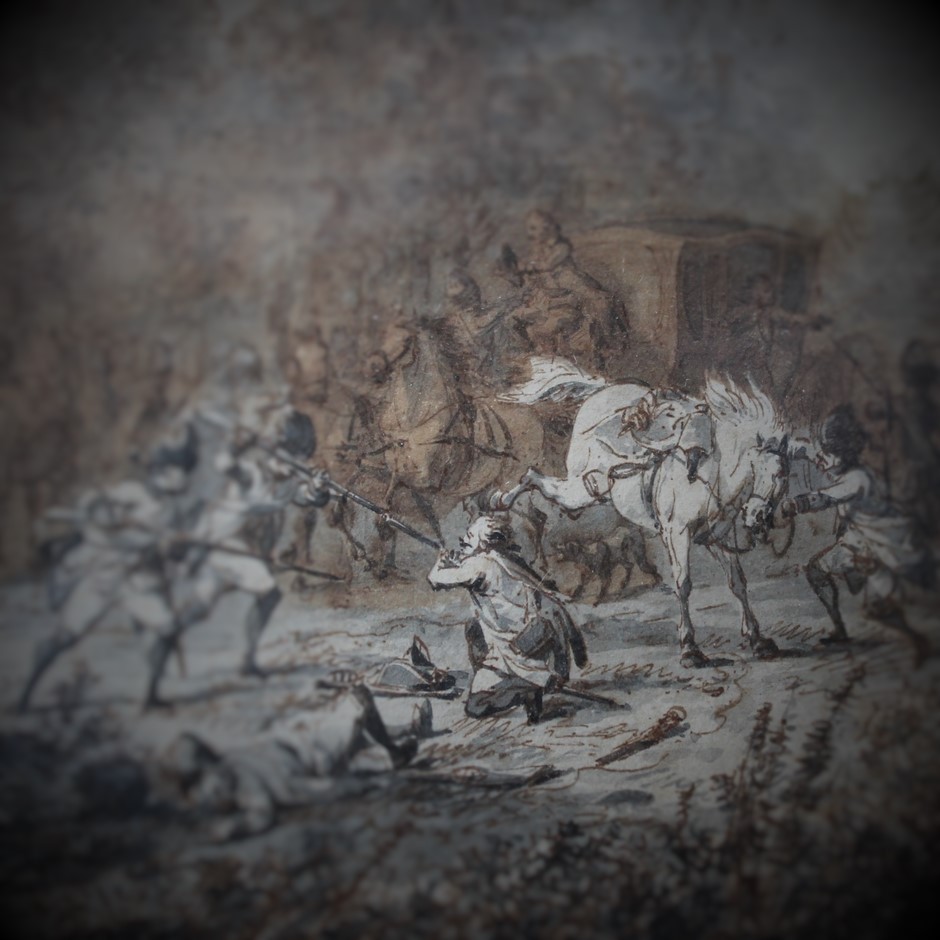 "Attack against the French convoy back from the Rastatt Congress"

The congress of Rastatt

This congress, which was held in Rastatt, aimed at settling disagreements over the occupation of certain parts of Germany by France, in particular the left bank of the Rhine, following the signing of the Treaty of Campo-Formio . The Directory gave instructions to its diplomatic agents, who vowed to continue its policy of domination. It read: "The treaty of Campo-Formio is only a preliminary; he will be exceeded; the Empire will be forced to accept new modifications. Formally Austria but also Prussia had consented confidentially to the presence of France on the left bank of the Rhine.But it was necessary to obtain the approval of the various members of the Holy Empire.It was intended to compensate the princes holding territories by the secularization of the ecclesiastical principalities, the settlement of the Thirty Years' War served as a model.

The opening of the congress took place on September 10, 1797, with no preliminary meeting to prepare it. Napoleon Bonaparte made only a brief visit to Rastatt. The persons in charge of representing France were: Antoine Bonnier d'Alco, former adviser to the court of Montpellier aids, former deputy to the Legislative Assembly, then to the Convention where he voted the death of the king during the trial of Louis XVI . He had already participated in the Lille negotiations between France and England; Jean-Baptiste Treilhard who was replaced by Jean Antoine Debry, having also voted the death of Louis XVI, rapporteur of the annexations of Mulhouse and Geneva; and Claude Roberjot, who had abandoned his status as a priest, substitute deputy to the Convention where he replaced Jean-Louis Carra, he became Minister Plenipotentiary at The Hague. These plenipotentiaries were dressed according to the revolutionary fashion of France, which must have offended the foreign diplomats who wore wigs and breeches. The future Chancellor of Austria Metternich, then a young diplomat, portrayed them as "caulked in their apartments and wilder than polar bears". Most surprising were the dealings the French resorted to. One of the foreign diplomats noted: "The congress looks like a stock exchange. The cabinet of Claude Roberjot was covered with maps of Germany; Everything was noted to the people who came to visit him, he said: this country, this bishopric, this abbey, we give them to one, that other to another, and so on. In spite of all, Prussia was moderate and Austria amiable, which allowed a first sketch on the Rhine boundary and the allowances to be granted. The changes in the success of the weapons, French victories and defeats of Jourdan in Germany (late 1798) lead to an extension of the Congress, until Austria broke the negotiations in April 1799. For their part, the French ambassadors continued to take advantage of their diplomatic immunity to spy on troop movements of their opponents.

The attack against the French convoy

The spying of the French ambassadors discovered, March 10, 1799, Archduke Charles orders them to return to France. On the 17th, Colonel Barbaczy ordered his regiment, Szeckler's hussars, to open all the mail from the French diplomats. Metternich left the congress on April 22, with all the other ambassadors, with the exception of the French, whose colonel Barbaczy refused to provide protection. Talleyrand, however, ordered his ministers to continue their espionage. On the 28th, Barbaczy ordered the French ambassadors to leave within 24 hours. The French representatives then ask for an escort, which is refused. They leave at night, but they are forbidden at first to leave the city1. Once in the countryside, they are attacked by Austrian hussars: Roberjot and Bonnier d'Alco are assassinated; Debry and Rosenstiel escape by chance the attack.Their papers are brought to the Archduke Charles in Vienna, then returned to Strasbourg. As early as the 29th, Bonnier and Roberjot were buried in Rastatt and Colonel Barbaczy promised to search for and arrest the assassins. Archduke Charles instituted on May 1st a commission of inquiry which was established in Villingen in the Black Forest under the presidency of Count von Spock. His investigation lasted about six months; his secret report was sent to Vienna, where he lost himself. Colonel Barbaczy was arrested with a few soldiers, then released shortly afterwards and promoted to Major-General. The Prussians accused Austria of having ordered the murder of the two French representatives. Criminal action for homicide and theft was quickly buried. The congress did not resume because of the formation of the Second Coalition. It appears that the attack was ordered by the Austrians, to obtain the papers of the ambassadors. The hussars would have gone farther than their orders.

This is exactly the kind of scene that Dirk Langendyk likes to portray. He knows the context and does not forget any details. Note this man in the center of the drawing about to be executed and this other already dead on the ground: it is about Roberjot and Bonnier d'Alco which we know that they were assassinated during this ambush. In the same way, in the background, we see two horsemen taking flight. One even loses his hat. Here are Debry and Rosenstie, whose story tells us that they escaped and saved their lives.

Dirk Langendyk, painter, draftsman and engraver, born in Rotterdam on March 8, 1748, died in Rotterdam on December 15, 1805.
He is a pupil of D-A. Bisschop in Rotterdam. He painted military scenes and battles in which stand out qualities of style and execution quite remarkable.
His drawings on the same subjects are no less interesting. He was a draftsman first and foremost and was greatly admired during his lifetime, especially for his detailed depiction of equestrian combat scenes.
A number of artists around him copy his work, including his pupil Johannes Adriaansz Bemme (1775-1841).
His works are quite rare.

Jean Tulard, Jean-Francois Fayard and Alfred Fierro, History and dictionary of the French Revolution. 1789-1799, ed. Robert Laffont, coll. "Bouquins", Paris, 1987, 1998
Joseph Auguste Souchon, Rastatt - The assassination of the French ministers on April 28, 1799, extract from Volume 32 of the Bulletin of the Academic Society of Laon, impr.Journal of the Aisne, 1907
E.Benezit, Dictionary of painters, sculptors and engravers, volume 6, ed. Gründ, 1976