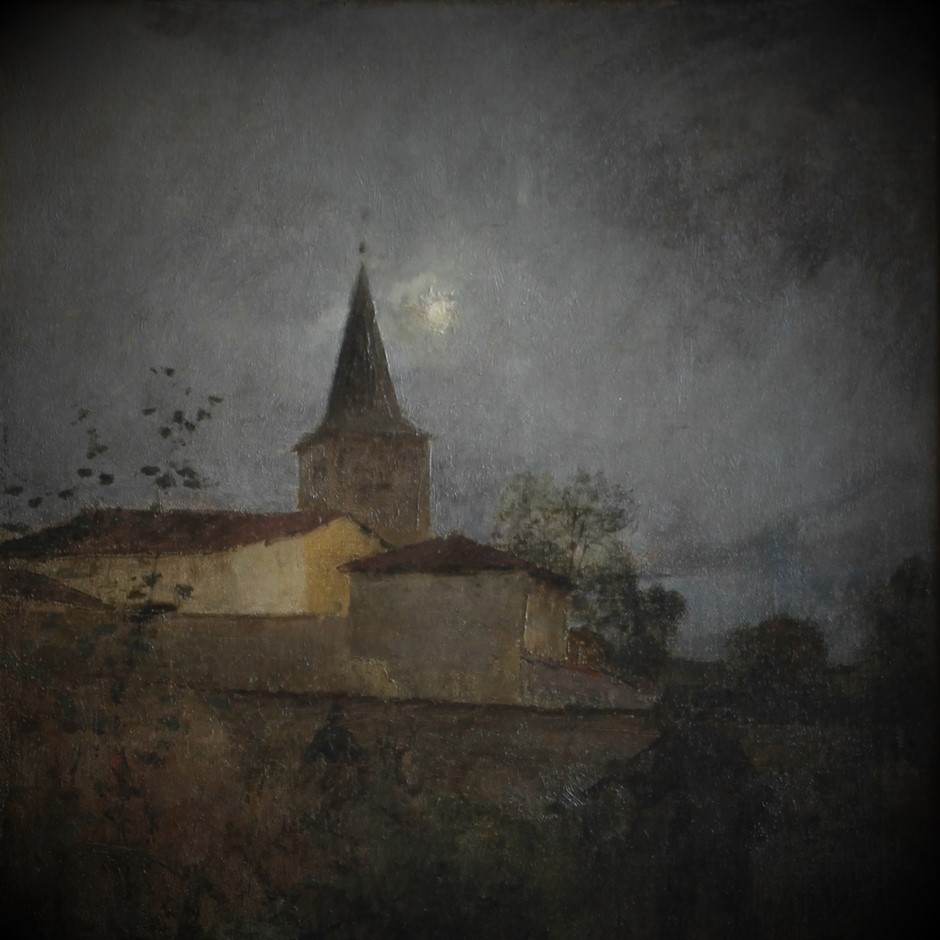 "CLair of Moon in Damvillers"

Night scenes are rare in Bastien-Lepage's work and are at the end of his short life. As witnessed, at the Museum of Fine Arts in Nancy, his "Lever de Lune in Algiers" which was given in 1938 by his brother Emile as being the last canvas of the artist. In the same vein, we can also mention "La Chaine" or "Fire in the village" (Museum of Fine Arts of Tournai) dated 1881-1882 where there is a cloudy sky, almost threatening, which dominates peasants reduced to simple laborious shadows. Still in the field of nocturnes, the Magnin Museum of Dijon retains an astonishing "view of Venice" also dated 1880-1881.

Despite the originality of the Moonlight, our work remains representative of the artist who likes to translate with force, the epic of the French countryside, and depicts the peasants in their simplicity as in their despondency.

The cold, the night, the slightly bent posture of the farmer due to the fatigue of a day of work in the open air, the fork on the shoulder, reveals us living conditions and difficult everyday life.

The color palette is cold and dark at the same time, but the lack of full moon light despite a crowded sky clings to the serifs. Indeed, it is a covered sky that the moon can pierce, making appear in the light of the steeple of the church in which it is reflected gently on the skin. In a concern for perfect realism, the protagonists are represented by black masses whose darkness hides the expressions of the faces. We understand, however, that their eyes meet.

The composition and the almost square format are audacious, as is the moment represented. But the bet is won, the moonlight is perfectly realistic.

Jules Bastien, known as Jules Bastien-Lepage, born November 1, 1848 in Damvillers and died December 10, 1884 in Paris, is a French naturalist painter.

Originally from Lorraine, Jules Bastien-Lepage, from a modest background, was formed only late in painting.

The one Emilio Zola considered in 1879 as the "grandson of Courbet and Millet" and as one of the tenors of naturalism, received an academic training in the studio of Alexandre Cabanel. After two failures, in 1875 and 1876, in the competition for the Prix de Rome, Bastien-Lepage knew how to build an original work. He knew how to look on the side of the realists, his elders, but also on the side of his contemporaries, defenders of the new painting, to which he borrows the light tones and the vibrating touch.

Bastien-Lepage devoted mainly his short life to two types of subjects: portraits first, which earned him a loyal clientele among artists - from Sarah Bernhardt to Coquelin elder - and within the republican bourgeoisie - from Simon Hayem to Leon Gambetta-, and the subjects peasants then, which he often brushes on the places of his childhood, seducing the public of the Salon with The Hayes (1877, museum of Orsay), Season of October (1878, Melbourne, National Gallery of Victoria) to Father Jacques (1881, Milwaukee Art Center) and L'Amour au village (1882, Moscow, Pushkin Museum).

The success came, the artist travels, especially in England, Switzerland and Italy, where he brings back landscapes but also paintings halfway between portraits and genre scenes, in which he sketches rural and urban life children and teenagers, hero of his Little peddler asleep (1882, Tournai, Museum of Fine Arts) or his Little shoe polisher in London (1882, Paris, Museum of Decorative Arts).

Jules Bastien-Lepage unfortunately could not give the full measure of his talent, he died prematurely at age 36, on December 10, 1884, in his studio rue Legendre in Paris.

And yet, he leaves an original and innovative work. His canvases appear in the greatest museums of the world: Paris, London, New York, Moscow, Melbourne, Philadelphia, etc ...

The day after his death, newspapers around the world report the premature death of the painter and his burial in the family cemetery Damvillers in the Meuse. In just ten years of activity, this son of modest farmers has earned a prominent place on the French and international art scene, although it was sometimes disputed.

Many discoveries concerning the biography of the artist, the history and the intention expressed by his works, allow from now on to abandon the romantic vision offered to the public by his family and his friends after his early disappearance, to draw the conclusion his incessant social struggle and his committed aesthetic struggle.