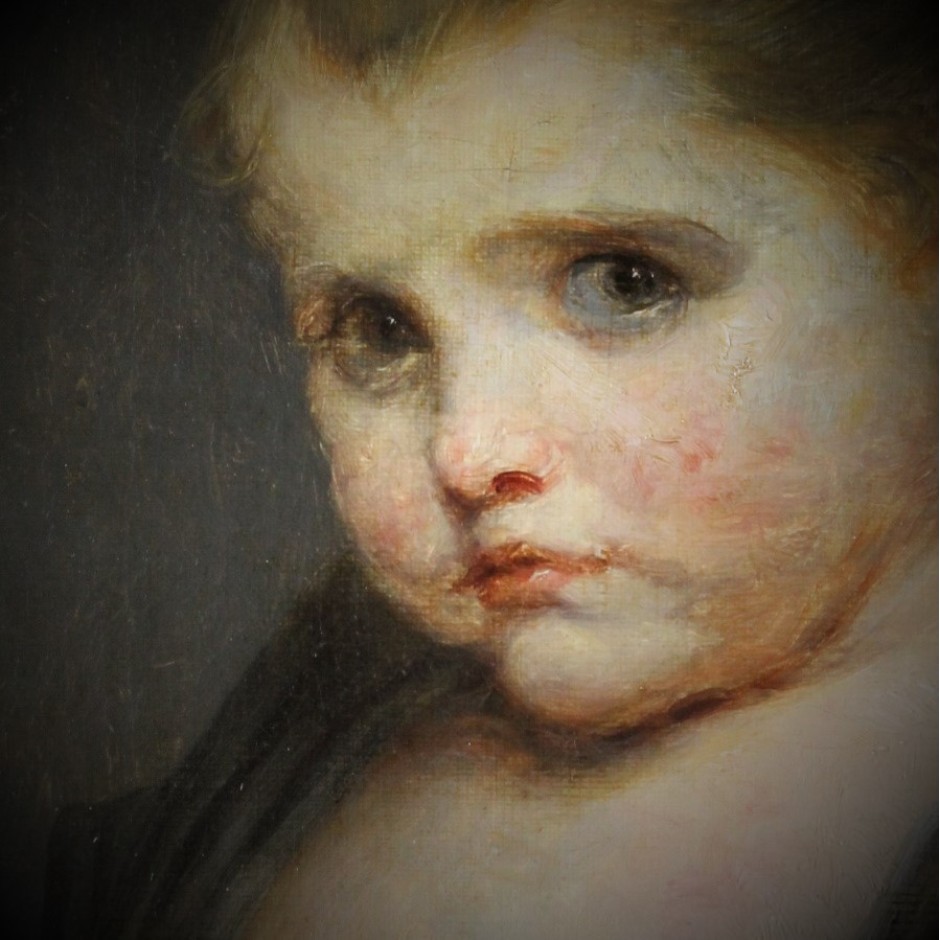 During his lifetime, Greuze had already gained immense popularity partly thanks to his faces of children's expressions. Our painting is one of those portraits so characteristic of his work that he likes from the 1760s.

This remarkable work, a reflection of the genius of Greuze, combines precision and velocity, making our painting a work accomplished in its technique but close to the sketch in its bill.

We observe with admiration these small pictorial touches from a rich palette, affixed to achieve the carnation, and these creamy impastations revealing thick fabrics and drapes. Thus it is easy for us to imagine Greuze painting with dexterity and "sculpting" this delicate portrait without hesitation.

The "greuzian" expression of this little girl testifies to the artist's ability to observe, feel and grasp the individual character of children. In his simple, rustic costume, the child already seems to have a very pronounced character, staring at us, head down, without intimidation and with a deep look.

Jean-Baptiste Greuze was born on August 21, 1725 in Tournus. Son of an entrepreneur and architect, he was drawn to drawing from his earliest years, in spite of the will of his father who intended him for business. He was supported in his vocation by the painter Lyons Charles Grandon, which he will be a student. Greuze followed his teacher in Paris where he settled in 1750. He became a student of Charles Joseph Natoire at the Royal Academy of Painting and Sculpture, professor with whom he had trouble.

In 1755, his "Father explaining the Bible to his children" is very successful. On February 3, 1759, he married Anne-Gabrielle Babuti, daughter of a bookseller at the Quai des Augustins, François Babuti, whose portrait he exhibited in 1761. The following year, April 16, in Paris, his wife gives birth to a daughter whom they name Anna-Geneviève. She embraced her father's career, which she supported until her death.

The popularity of Jean-Baptiste Greuze is confirmed with other genre scenes with a moral purpose, such as "The Accordion of Village" (Salon of 1761, Paris, Louvre Museum), "La Piété filière" (Salon of 1763, acquired by Catherine II, St. Petersburg, Hermitage Museum), "The Ungrateful Son, The Punished Son" (sketches in 1765, Palace of Fine Arts in Lille, paintings in 1778, Louvre Museum) or "La Mère beloved "(Salon of 1769, Madrid, private collection). Diderot says his enthusiasm. The Revolution of 1789 brought the vogue of antiquity and devalued its work, but the nineteenth century perpetuated the tradition of sentimental painting.

Greuze asks for the divorce which is pronounced on August 4, 1793. Having placed his fortune in annuities on the Hotel de Ville, the Revolution ruined it entirely. After exhibiting at the Salons of 1800, 1801 and 1804, the Salon in 1808 exhibited "St. Mary the Egyptian" three years after his death. He had, among others, Marie-Geneviève Brossard of Beaulieu, Jeanne-Philiberte Ledoux, Constance Mayer, Pierre Alexandre Wille, Charles-Henri Desfossez and Anna-Geneviève Greuze.

Died in his home on rue des Fosses Saint Denis (along the Boulevard de Bonne Nouvelle), Greuze rests in Paris at the Montmartre cemetery. Since 1864, a street Greuze, route of the 16th arrondissement of Paris, pays tribute to the artist. One can, on the other hand, always see his birthplace in Tournus.